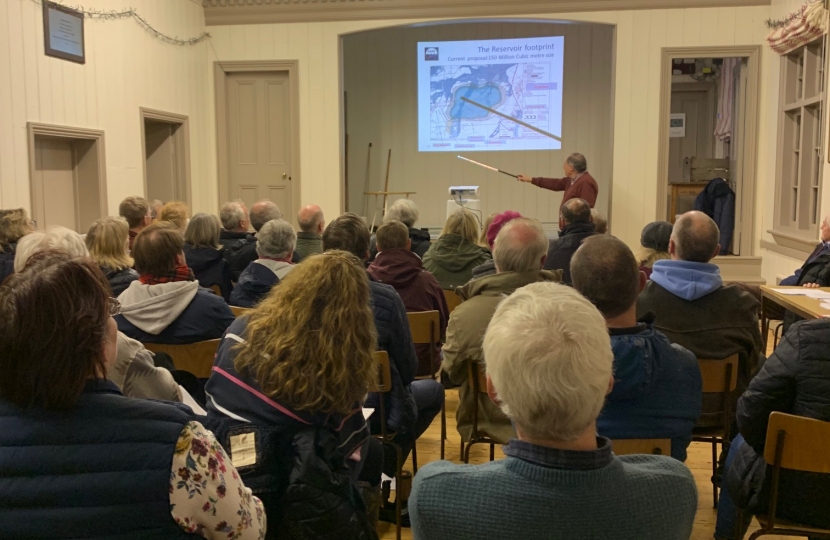 Cllr Ash has attended meetings organised by GARD in support of residents and raised the issue of the proposed reservoir near The Hanneys with MPs David Johnston & Layla Moran.

This is a battle on behalf of residents as neither the science, not residents in the area support the proposal.

She is calling for:

-The Severn Thames transfer solution to be prioritised and started earlier. It will cause significantly less disruption and may eliminate the need for the reservoir entirely.

-A focus on leak fixing to improve the efficiency of the current system.

-More transparency from Affinity Water and Thames Water, the applicants, over the impact which is highly likely to be extremely detrimental for local residents and very negative for the local environment.

-Support from OFWAT to relook at the numbers that are driving the planning numbers being used. Planning for 'the 1 in 500 year drought' event could realistically be brought down to to 1 in 250 years. Wales currently works on a 1 in 200 year planning number.

-A pivot to focusing on finding solutions rather than this ongoing, 20 year battle between stakeholders.

The last point is important as currently organisations such as GARD, as SME's are providing all the data, but the land will continue to be eyed up as a potential site unless an alternative is also worked on. The small solar farm that is currently in place could be increased in size or part of the area could be earmarked for a small local community led, aesthetically pleasing self-build residents park or similar. Both of these solutions would offer an improvement on a 30 m high above ground earth feature the size of 2500 football pitches that can't be used for recreation or water sports.

David Johnstone MP asked a question in the House of Commons at PMQs on the 9th March to challenge Thames Water that they haven't yet proved the need for the current proposal.

Residents that wish to share their thoughts about the proposed plan can do so at: https://wrse.uk.engagementhq.com DEADLINE 14th MARCH

Cllr Ash today shared thoughts on a new report from the Education Policy Institute (EPI) commissioned by the Government which indicates the potential impact in financial earning terms for current pupils if no catch up support were to take place.